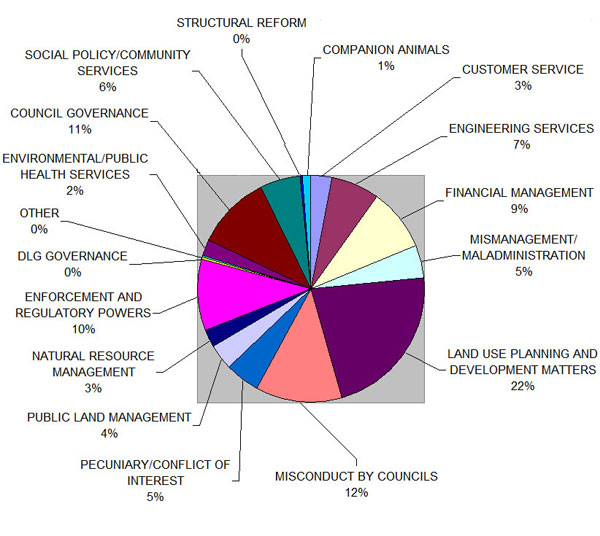 We received 1130 complaints in 2010–11, compared to 1029 in 2009–10. These complaints were spread over 119 councils. Over half of all complaints/allegations related to 21 councils, or just 14% of all general purpose councils in NSW. We did not receive any complaints about 33 councils.

The total number of complaints received this year represents an increase over the number received last year (in the order of 8.9%).

City of Sydney Council received the most complaints. Of these more than half related to parking provision and parking enforcement.

The Division also received 5 complaints which did not specify the name of the council that the matter related to.

There were 2 formal investigations of a pecuniary interest complaint under section 462 of the Local Government Act 1993 commenced in the period.

The Pecuniary Interest and Disciplinary Tribunal determined no matters during 2010–11.

In 2010–11 we received 7 complaints alleging misbehaviour by councillors. Four formal investigations under the misbehaviour provisions were commenced during this period.

The Pecuniary Interest and Disciplinary Tribunal determined 1 misbehaviour matter during 2010–11.