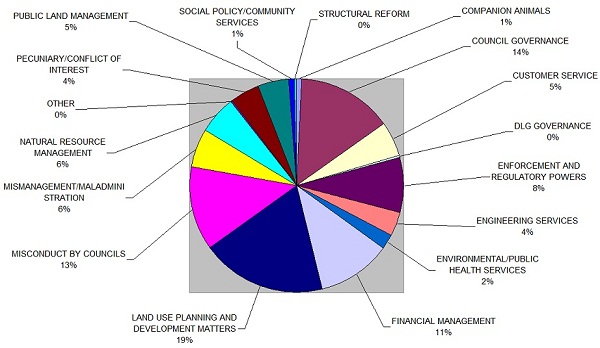 The total number of complaints received this year represents a small increase over the number received last year (in the order of 3.8%).

Newcastle City Council received the most complaints. Of these, three quarters related to issues about the Laman Street fig trees.

The Division also received 64 complaints which did not specify the name of the council that the matter related to. This is a large increase on the previous year. The majority of these matters related to public land management and planning and development. Many of the issues raised in these complaints were about matters that were not related to decisions or actions of a specific local council, such as, a decision of a joint regional planning panel.

There were no formal investigations of a pecuniary interest complaint under section 462 of the Local Government Act 1993 commenced in the period. However, there was one investigation report referred to the PIDT during 2011-12.

The Pecuniary Interest and Disciplinary Tribunal determined two matters during 2011–12. One councillor was counselled for a breach of the pecuniary interest provisions of the Act. A further councillor was reprimanded.

In 2011–12 we received 15 complaints alleging misbehaviour by councillors. Four formal investigations under the misbehaviour provisions were commenced during this period.

The Pecuniary Interest and Disciplinary Tribunal determined no misbehaviour matters during 2011–12.

One matter was referred to the Tribunal for its consideration during this period.