Below is a chart showing details of the complaints received during the July 2012 to June 2013 period by keyword. 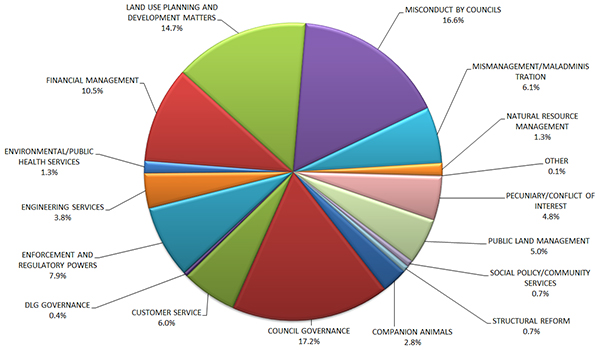 The total number of complaints received this year represents a small decrease over the number received last year (in the order of 1.1%).

The Division also received 81 complaints which did not specify the name of the council that the matter related to.

There was one formal investigation of a pecuniary interest complaint under section 462 of the Local Government Act 1993 commenced in the period.

The Pecuniary Interest and Disciplinary Tribunal determined two matters during 2012–13. No breach was found in one matter. One councillor was suspended for a period of 2 months for a breach of the pecuniary interest provisions of the Act by failing to lodge the annual return of interests as required.

In 2012–13 we received 28 complaints alleging misbehaviour by councillors. Seven formal investigations under the misbehaviour provisions were commenced during this period.

One councillor received two suspensions; one for 4 months for repeated acts of misbehaviour by failing to leave a meeting when expelled; one for 2 months for failing to comply with a council resolution requiring an apology.

The appeals against the Chief Executive’s decision to suspend two councillors for a period of one month each were not allowed by the Tribunal. The Tribunal upheld the Chief Executive’s decision to suspend the councillors for one month each for failing to disclose and appropriately manage significant non-pecuniary conflicts of interests.

Three matters were referred to the Tribunal for its consideration during this period.

Note: the “misbehaviour” provisions of the Local Government Act 1993 were replaced by “misconduct” provisions effective from 1 March 2013.