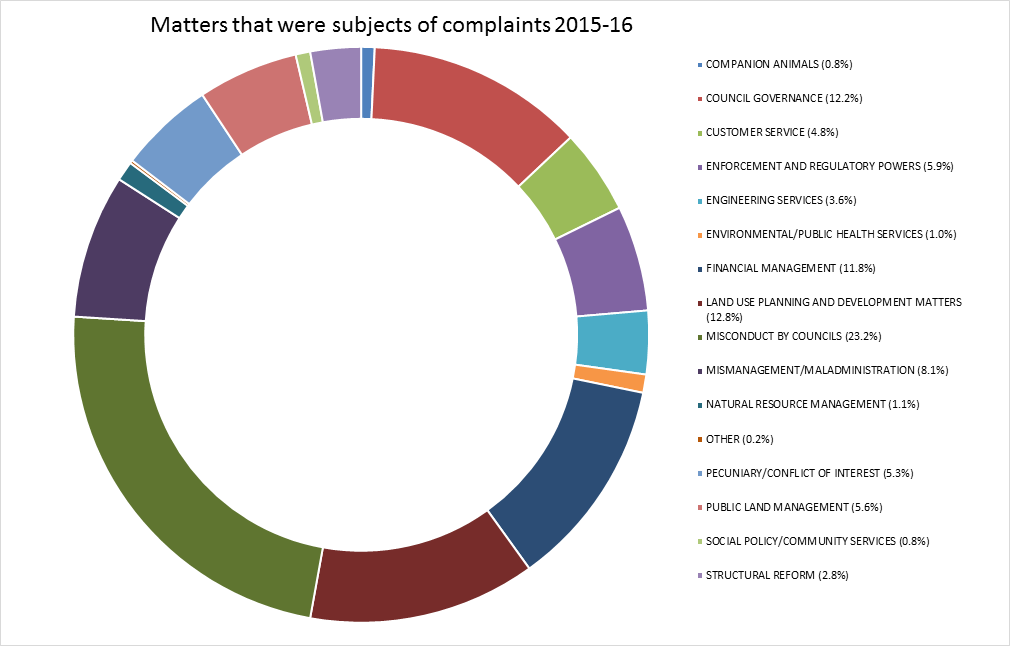 OLG received 1,454 complaints in 2015-16, compared to 1,011 in 2014-15. These complaints were spread over 139 councils. The total number of complaints received this year represents a significant increase over the number received last year (in the order of 44%). OLG also received 20 complaints which did not specify the name of the council that the matter related to.

Auburn City Council received the most complaints. These primarily related to the conduct of councillors and contributed to the decision to commence a Public Inquiry into the Council.

NCAT determined both matters during 2015-16. One councillor was reprimanded and her right to be paid any fee or other remuneration to which she would otherwise be entitled as the holder of the civic office was suspended for a period of three months. This councillor failed to disclose her interest in a planning proposal before the council

One councillor was initially suspended from civic office for four months. The councillor had failed to disclose his interest in a planning proposal before the Council. The councillor remained in the chamber participated in the consideration of, and voted upon, the matter in breach of the pecuniary interest provisions of the Act.

An appeal was lodged with the Supreme Court in relation to this NCAT decision. The Supreme Court overturned the decision and found that the councillor did not have a pecuniary interest and therefore had not breached the provisions of the Act.

In 2015-16 OLG received 68 complaints alleging misconduct by councillors. This is a 106% increase from the previous year. Five formal investigations under the misconduct provisions were commenced during this period. NCAT determined one misconduct matter during 2015-16.

The Chief Executive of OLG determined two misconduct matters during this period. One councillor’s right to be paid any fee or other remuneration to which he would otherwise be entitled as the holder of the civic office was suspended for three months for failing to comply with an applicable requirement of the code of conduct by failing to appropriately manage a significant non-pecuniary conflict of interests. One councillor was reprimanded and received a suspension for two months for failing to comply with applicable requirements of the code of conduct and section 439 of the Act by failing to appropriately manage allegations of a breach of the code of conduct. Both these decisions are subject to an appeal to NCAT.

Three matters were referred to NCAT for its consideration during this period.

There were two investigations overseen this financial year with the reports being provided to the Minister for Local Government. The first involved Strathfield Council. The investigation found that there have been systemic failures in the Council’s processes, culminating in maladministration and serious and substantial waste. While it was acknowledged that Council had taken steps to remedy concerns raised during the investigative process, there were seven recommendations made to the Minister.

The second investigation related to the former Hurstville City Council. The investigation found that the Council did not manage complaints about its general manager in accordance with the requisite requirements and that a councillor had not managed a perceived conflict of interests appropriately. There were four recommendations made to the Minister.