Below is a chart showing details of the complaints received during the July 2016 to June 2017 period by keyword. 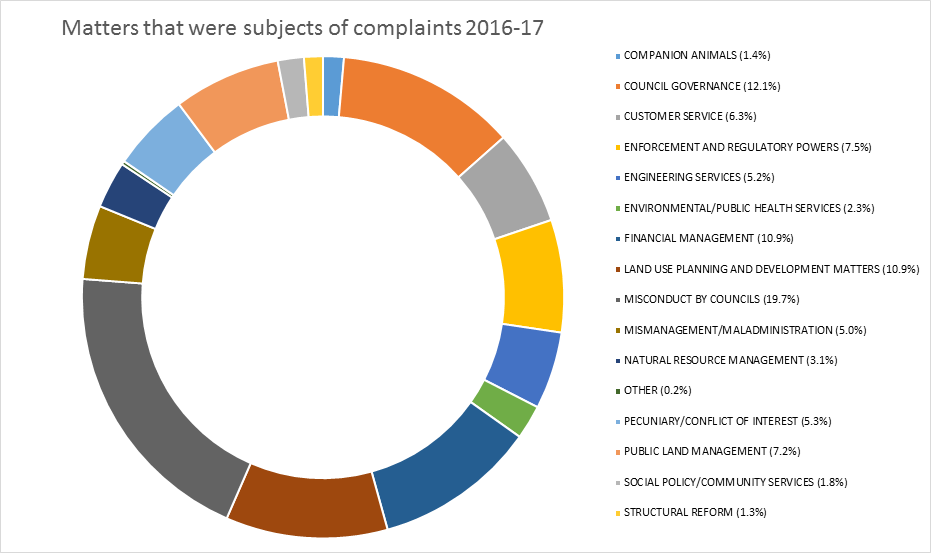 OLG received 811 complaints in 2016-17, compared to 1,454 in 2015-16. These complaints were spread over 120 councils. The total number of complaints received this year represents a significant decrease over the number received last year (in the order of 44%). OLG also received 19 complaints which did not specify the name of the council that the matter related to.

There were no pecuniary interest matters determined by the NSW Civil and Administrative Tribunal (NCAT) during 2016-17.

In 2016-17 OLG received 36 complaints alleging misconduct by councillors. This is a 55% reduction from the previous year. No investigations under the misconduct provisions were commenced during this period. NCAT determined four misconduct matters during 2016-17. Two of these matters related to appeals of the Chief Executive’s decisions.

The NCAT determined appeals of decisions made by the Chief Executive relating to the misconduct of two councillors. The Chief Executive’s decision to suspend the councillor’s right to be paid any fee or other remuneration to which he/she would otherwise be entitled as the holder of the civic office for three months for failing to comply with an applicable requirement of the code of conduct by failing to appropriately manage a significant non-pecuniary conflict of interests was upheld. The NCAT set aside the Chief Executive’s decision to reprimand and suspend the other councillor for alleged breaches of the code of conduct.

Two matters were referred to NCAT for its consideration during this period.

Three public inquiry reports were presented to Parliament in the period 2016-17.

The Public Inquiry Commissioner observed that there was a serious division between the majority and the minority councillors and between the minority councillors and the General Manager. The Commissioner expressed the view that it was unlikely the situation could have or would have improved if the Council had continued. The former Murray Shire Council was merged during the term of the public inquiry.

A number of recommendations were made for policy and procedural reforms to address difficulties arising from managing complaints of bullying and harassment of the General Manager.

The Auburn Public Inquiry was called in response to serious concerns about Auburn City Council’s decision-making concerning planning and development matters, and that those decisions might have delivered an inappropriate benefit to some councillors. Council was placed under administration for the duration of the public inquiry process.

While the Public Inquiry Commissioner made a number of adverse findings regarding a number of planning proposals being dealt with by the Council, he expressed satisfaction that subsequent actions by the new Council’s Administrator had placed these matters on hold. In those circumstances, the Commissioner did not make any recommendations relating to these matters.

The Commissioner endorsed the current governance framework protecting the independence of planning staff in relation to the advice provided by them to the elected body.

The Commissioner made recommendations for the new Council in terms of reviewing its road closure processes, maintaining its governance frameworks and improvements to managing conflict between councillors and council staff.

The Public Inquiry Commissioner found certain decisions and administrative arrangements were symptomatic of dysfunction – this included, for a time, the inability of the Mayor to access her own office.

The Commissioner found that the inability of the protagonists within the governing body to manage conflict had resulted in dysfunction in the performance of their statutory functions.

To remedy these matters the Commissioner recommended that a Performance Improvement Order be issued to the Council and a temporary adviser appointed.